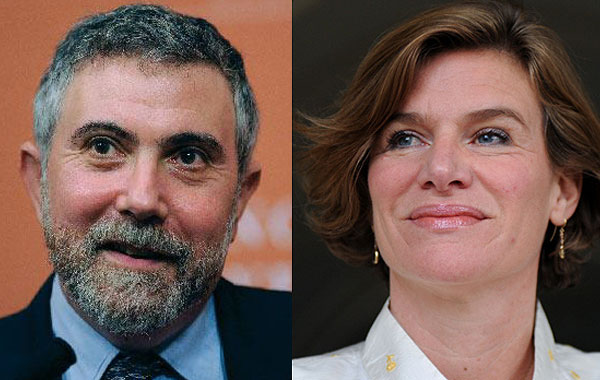 The 33rd CIRIEC International Congress will feature an exceptional panel of top-level speakers, an inaugural lecture by Nobel laureate Paul Krugman, and a closing lecture by Mariana Mazzucato, a leading economist in the analysis of the role of government as an engine of innovation.

Paul Robin Krugman (b. 1953) is an American economist, professor and columnist. He is professor of economics at Princeton University, Centenary Professor at the London School of Economics, and op-ed columnist for The New York Times. In 2008 he was awarded the Nobel Prize in Economics for his contributions to the New Trade Theory and the New Economic Geography. Krugman is among the world’s most influential economists. He is the author or editor of 27 books and has published more than 200 scholarly articles in professional journals and edited volumes.

Mariana Mazzucato is Professor in the Economics of Innovation and Public Value at University College London where she is the founding director of the UCL Institute for Innovation and Public Purpose. Her work challenges orthodox thinking about the role of the state and the private sector in driving innovation; how economic value is created, measured and shared; and how market-shaping policy can be designed in a ‘mission oriented way’ to solve the grand challenges facing humanity. She is winner of international prizes including the 2020 John von Neumann Award and the 2018 Leontief Prize for Advancing the Frontiers of Economic Thought.

In addition, more than 50 researchers, business executives and public managers will be taking part in 6 plenary sessions and 8 workshops at the Congress, debating topics of great interest such as housing and urban development, governance, partnerships between the public and social economy, just ecological transition, public investment, coverage of essential services such as energy, transport and water, innovation and the sustainable development goals. All of this, together with 16 sessions dedicated to the social economy, in which more than 60 papers will be presented for debate.

It is therefore expected to be an intense and participative Congress, facilitated by the fact that the Congress venue will have simultaneous translation in Spanish, English, French and German.