CIRIEC invites you to the 33rd International Congress on Public, Social and Cooperative Economy 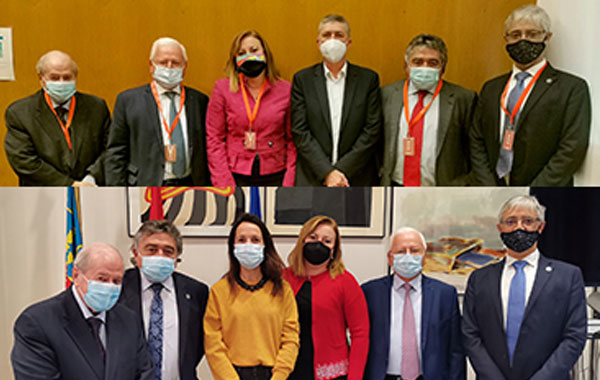 CIRIEC Spain and CIRIEC-International are stepping up preparations for the 33rd CIRIEC International Congress, to be held from 13 to 15 June 2022 in Valencia. To this end, on 22 and 23 November, the city hosted a series of CIRIEC meetings and institutional receptions, as well as a visit to the venue for the Congress, the Palau de las Arts, in the City of Arts and Sciences of Valencia.

A delegation from CIRIEC International, led by its president, Alain Arnaud, and the president of CIRIEC Canada, Leopold Beaulieu, together with the president of CIRIEC-Spain, Adoración Mozas; the director of CIRIEC-Spain and curator of the 33rd Congress, José Luis Monzón, and the president of the Scientific Commission, Rafael Chaves, were received by the councilor for Sustainable Economy, Rafael Climent, who took an interest in the preparations for the Congress and appreciated the main speakers scheduled for the Congress, Nobel Prize winner Paul Krugman, and Professor Mariana Mazucatto.

The same delegation was also received at the Palau de la Generalitat Valenciana by the Director General of Analysis and Public Policy, Ana Berenguer, who also expressed the enthusiasm of the Presidency of the Generalitat to host and participate in this event.

Invitation to the Congress to the international community

CIRIEC Spain and CIRIEC International invite the international community to the Congress, aimed at managers of public and private companies at a global level, representatives of the economic and social world, cooperative and social economy leaders, trade unionists, politicians, professionals and scientists.

The inaugural lecture will be given by Paul Krugman, winner of the 2008 Nobel Prize in Economics. Paul Robin Krugman (b. 1953) is an American economist, professor and columnist. He is professor and international affairs at Princeton University, Centenary Professor at the London School of Economics and a columnist for the New York Times. Krugman is among the world’s most influential economists. He is the author or editor of 27 books and has published more than 200 scholarly articles in professional journals and edited volumes.

Programme and call for papers

CIRIEC International also held a meeting of the Praesidium on 23 November at the Faculty of Economics of the University of Valencia, where the programme of the Congress was finalised.

According to the announcement, more than 50 researchers, business executives and public sector managers will take part in 6 plenary sessions and 8 workshops at the Congress, debating topics of great interest such as housing and urban development, governance, partnerships between the public economy and the social economy, just ecological transition, public investment, coverage of essential services such as energy, transport and water, innovation and sustainable development objectives.

CIRIEC Spain has also launched a call for papers for the Congress. In addition to the sessions described above, 16 paper presentation sessions are planned, dedicated to the latest research in the social economy, in which more than 60 papers may be submitted for debate.

The 33rd International Congress of CIRIEC in Valencia builds on the success of the 19th Congress, also held in Valencia in 1992 under the direction of Professor José Barea, and the 28th Congress in Seville, whose commissioner was the current President of CIRIEC-Spain, Adoración Mozas.

Valencia is also an international reference in terms of the social economy, both in terms of research and practical achievements, with a strong co-operative movement and a well-established third sector. In the words of Professor José Luis Monzón, “with these references, it is logical that Valencia, 30 years on, should be the international starting point for a new stage, a decisive stage in overcoming the challenges facing our society. Without a doubt, I believe that in 2022 Valencia will be the world capital of the public economy, co-operativism and the social economy”.