The programme for the 33rd CIRIEC International Congress – Valencia, 13-15 June 2022 is now available 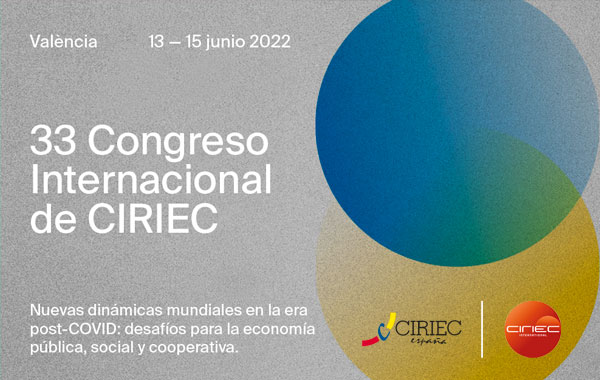 The 33rd International Congress of the International Centre of Research and Information on the Public, Social and Cooperative Economy (CIRIEC) will be held in Valencia (Spain) on the 13th, 14th and 15th June 2022. The Congress will be held under the theme “New global dynamics in the post-Covid era: challenges for the public, social and cooperative economy”, and will take place in the incomparable setting of the Palau de les Arts, in the City of Arts and Sciences, designed by architect Santiago Calatrava.

CIRIEC Spain and CIRIEC International invite the international community to the Congress, aimed at managers of public and private companies at a global level, representatives of the economic and social world, cooperative and social economy leaders, trade unionists, politicians, professionals and scientists.

The Congress in Valencia has an exceptional panel of high-level?speakers, an opening conference by Nobel Laureate Paul Krugman and a closing conference by Mariana Mazzucato, a leading economist in analysing the role of governments as a driver of innovation.

Moreover, over 50 researchers, leaders of public and social economy enterprises,and public sector managers will participate in 6 plenary sessions and 8 workshops, discussing topics of great interest such as housing and urban development, governance, partnerships between the public and social economy, a fair ecological transition, public investments, provision of essential services such as energy, transportation and water, innovation and the sustainable development goals.

In addition, there are 16 sessions dedicated to the cooperative movement, the social economy and the public economy, in which around 80 communications, selected from among 300 proposals submitted for discussion.

It is therefore expected to be an intense and participative Congress, with simultaneous translation into English, French, German and Spanish. The 33rd International Congress of CIRIEC in Valencia builds on the success of the 19th Congress, also held in Valencia in 1992 under the direction of Professor José Barea, and the 27th Congress in Seville, whose commissioner was the current President of CIRIEC-Spain, Adoración Mozas.

Valencia is also an international reference in terms of the social economy, both in terms of research and practical achievements, with a strong cooperative movement and a well-established third sector. According to Professor José Luis Monzón, “with these references, it is logical that Valencia, 30 years on, should be the international starting point for a new stage, a decisive stage in overcoming the challenges facing our society. Without a doubt, I believe that in 2022 Valencia will be the world capital of the public economy, the cooperative movement and the social economy”.

CIRIEC invites the international community to the Congress, undoubtedly one of the main events of the year in the field of public economy, cooperative movement and social economy. The full programme, as well as registration and accommodation details are now available on the official website of the Congress: http://ciriec.es/valencia2022